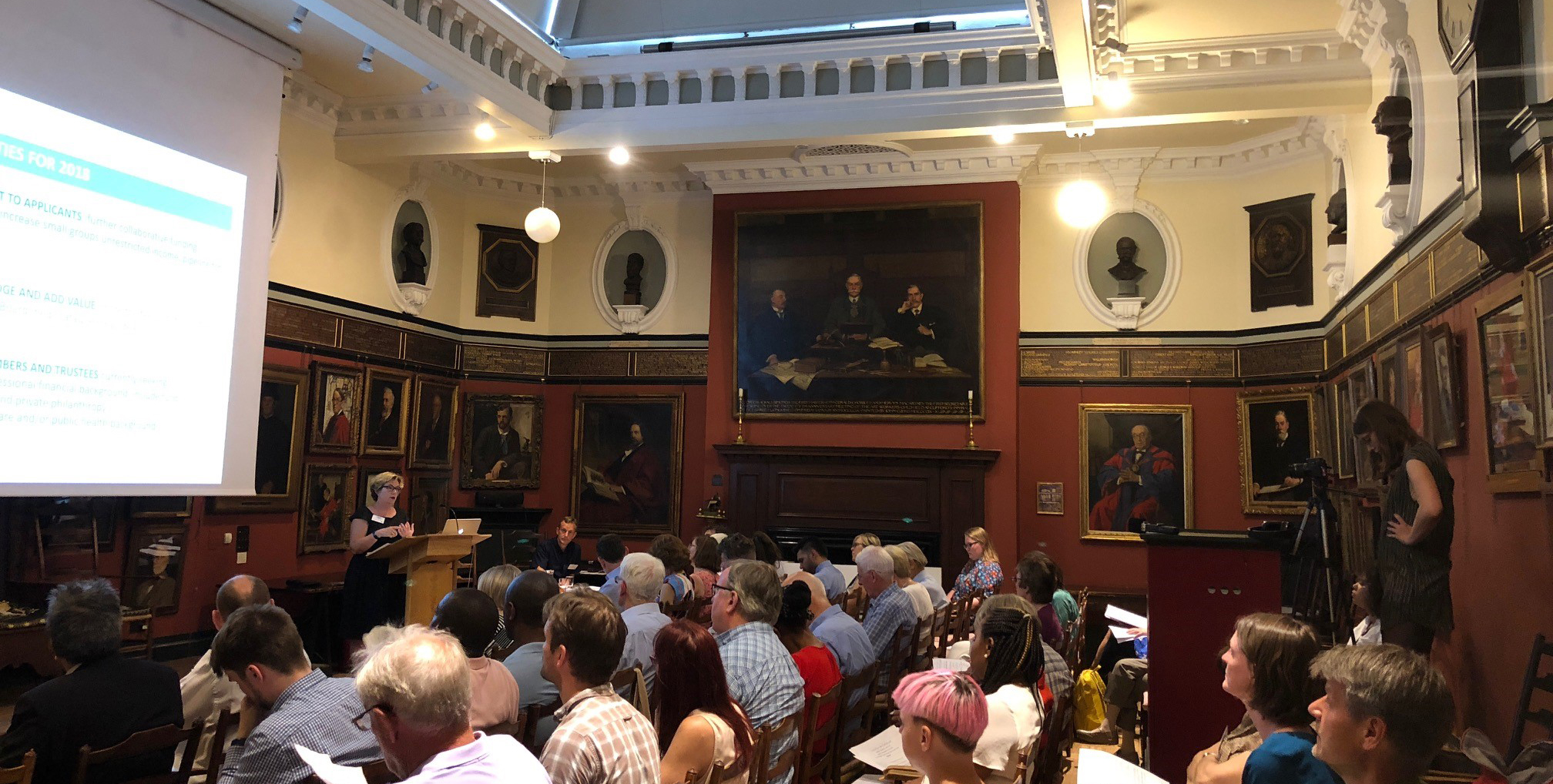 London Catalyst held its AGM on one of the hottest days of the year, in a new venue, with three speakers, a new format and the promise of ‘the best sandwiches in London’. A lot to look forward to.

Maggie our Chair of Trustees opened proceedings, welcoming guests to the wood-panelled Georgian splendour of the Art Worker’s Guild, and thanked our members and donors who have supported the charity during the year.

‘For the benefit of all? Implementation and challenges of Universal Credit’

David Finch, Senior Research Fellow at the Resolution Foundation, was our keynote speaker on the topic of Universal Credit (click to view his PowerPoint presentation as PDF).

David opened with findings from a recent study on London’s living standards. The Resolution Foundation have reported that there has been a very large increase in employment levels in London in the last few years. 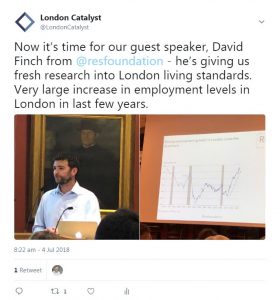 Wages in London have been squeezed by -7.3% and it is all due to the increase in employment. New Londoners are doing new jobs, which are low paid.

This set the theme of the day. Universal Credit (UC) is replacing existing working-age benefits; it’s designed to simplify the system and incentivise work. However, the original model has been scaled back and is less generous than envisaged.

David stated that working families and single-parent families are set to lose out.

He also remarked that “if things don’t change, we are expecting the biggest increase in inequality since the 1980s”.

Does UC reflect the reality of people’s lives?

David observed that problems begin when the UC encounters the reality of how people live. It’s difficult for some people to manage with a single monthly payment, being paid one month in arrears, and waiting weeks for their first payment. Childcare costs must be paid up-front then claimed back afterwards. Self-employed people may struggle. 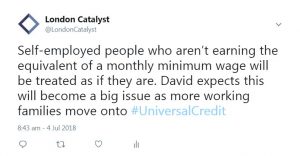 UC was originally intended to be fully rolled out by 2018. It is now expected in 2023. The reform might be good in theory, but it is hugely problematic in practice.

Fundamental to this is a loss of trust in the system because of payment delays and practical problems that have caused real hardship.

“We recommend fixing Universal Credit rather than scrapping it” 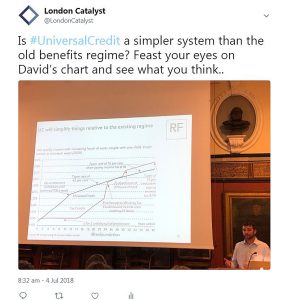 In conclusion, the Resolution Foundation recommend fixing UC; advocating improving incentives for second earners by introducing a new work allowance, encouraging progression at work, restoring the generosity of the original model and in the longer-term, lowering the taper rate and increasing childcare support.

It was interesting to hear David’s analysis although the impression remained of a system dogmatically and structurally antagonistic to the lives of many of the poorest and disadvantaged in society.

Helen jointly manages Hackney Migrant Centre, one of the many frontline organisations across London that have received a Samaritan grant from us. She spoke from the heart about people with “no recourse to public funds” (NRPF) and cuts to legal aid.

Many people who have lived legally in the UK for years, have contributed and have children, find themselves caught in a relentless, fee-driven bureaucratic cycle. 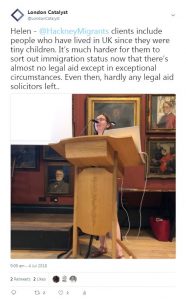 “The pressure on services like ours is immense” said Helen as she offered a sobering account of the hoops migrants must jump through and the financial and legal hurdles they face in the continuing ‘hostile environment’.

Alison (our Grants Administrator) shared findings from our recent survey of grantees on their service users’ experiences of UC. We heard that the long delay in receiving the first UC payment has left people with no food to eat, rent arrears, being threatened with eviction, and getting into debt to cover every-day living costs.

Samaritan grants and Universal Credit – our survey results in full

There were other unexpected negative outcomes for the public purse too, notably prolonging people’s hospital admissions:

“Young homeless drinker. Universal credit… is one of the key criteria used by local authorities’ housing teams to determine eligibility. Patient had to stay in hospital while universal credit application was processed.”

Grantees told us about other problems people are encountering with UC, including:

“Care leavers don’t necessarily understand what money is being paid in when, and what it’s designed to cover. This makes them vulnerable to payday loans and other debts as they struggle to make ends meet.”

“To improve the welfare system, we suggest…”

There is clearly much wrong with the implementation of UC and in a spirit of wishful optimism we concluded the AGM by asking for suggestions to improve the system and received the following suggestions:

Thanks to all who came along to our AGM

We learnt from David that the UC model may be theoretically sound but is struggling to adapt to how people live. Helen eloquently described the plight of those excluded from social welfare support and Alison revealed the unintended consequences of a system failing to deliver.

The speakers offered food for thought, the venue proved popular, the debate was positive and passionate. And in a straw poll of volunteers one thing was certain: the sandwiches were indeed the best in London.

More Articles…
Patron: Her Majesty the Queen
Charity Registration 1066739. Registered Company 3460296.
Back To Top
We use cookies on our website to give you the most relevant experience by remembering your preferences and repeat visits. By clicking “Accept All”, you consent to the use of ALL the cookies. However, you may visit "Cookie Settings" to provide a controlled consent.
Cookie SettingsAccept All
Manage consent

This website uses cookies to improve your experience while you navigate through the website. Out of these, the cookies that are categorized as necessary are stored on your browser as they are essential for the working of basic functionalities of the website. We also use third-party cookies that help us analyze and understand how you use this website. These cookies will be stored in your browser only with your consent. You also have the option to opt-out of these cookies. But opting out of some of these cookies may affect your browsing experience.
Necessary Always Enabled
Necessary cookies are absolutely essential for the website to function properly. These cookies ensure basic functionalities and security features of the website, anonymously.
Functional
Functional cookies help to perform certain functionalities like sharing the content of the website on social media platforms, collect feedbacks, and other third-party features.
Performance
Performance cookies are used to understand and analyze the key performance indexes of the website which helps in delivering a better user experience for the visitors.
Analytics
Analytical cookies are used to understand how visitors interact with the website. These cookies help provide information on metrics the number of visitors, bounce rate, traffic source, etc.
Advertisement
Advertisement cookies are used to provide visitors with relevant ads and marketing campaigns. These cookies track visitors across websites and collect information to provide customized ads.
Others
Other uncategorized cookies are those that are being analyzed and have not been classified into a category as yet.
SAVE & ACCEPT