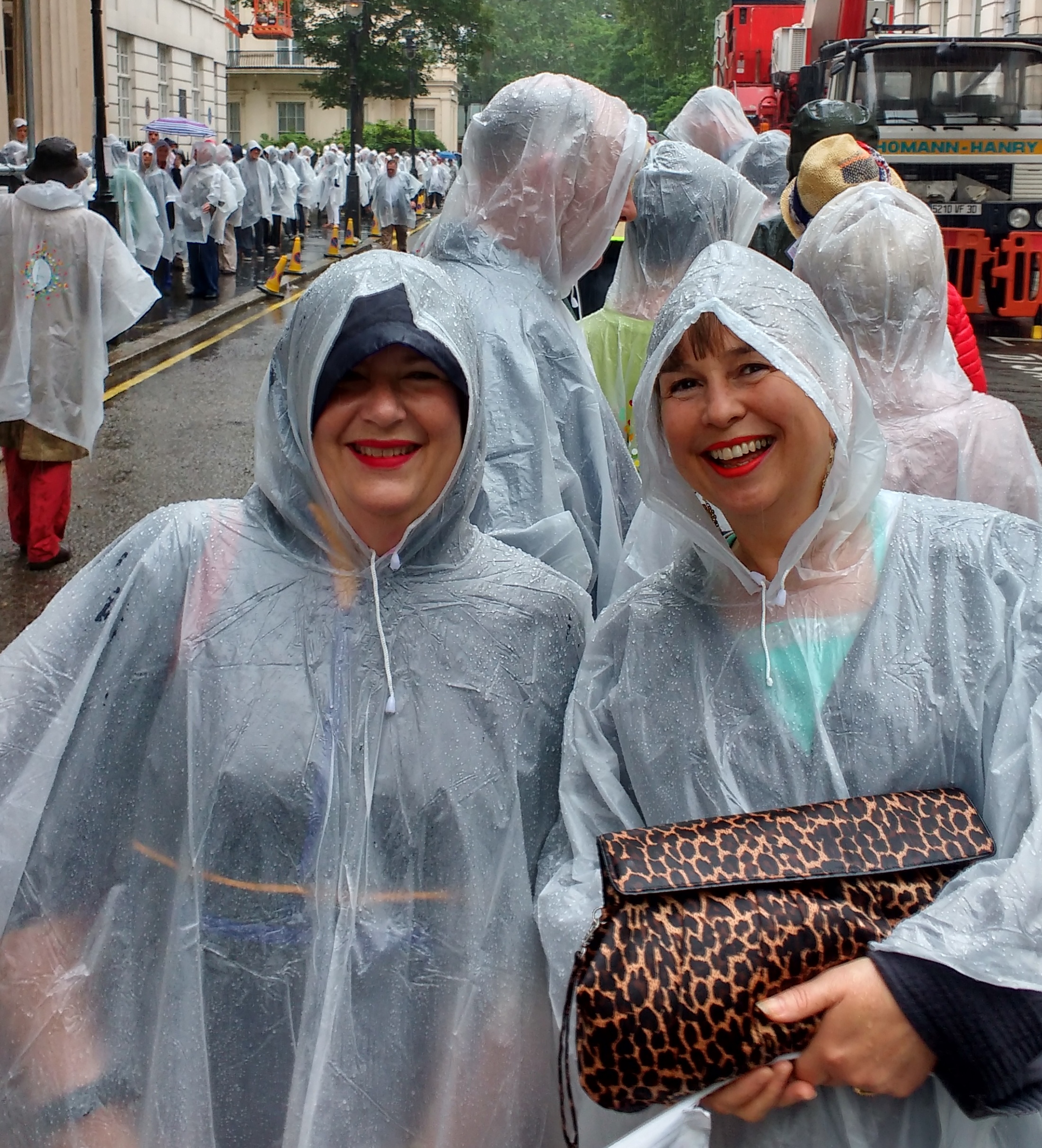 London Catalyst’s Director, Victor Willmott, shares his behind-the-scenes account of the Patron’s Lunch, hosted by The Queen on the Mall outside Buckingham Palace on a rain-sodden 12th June 2016… Dark clouds loomed with foreboding as we walked to the tube; a portent for staying in or a challenge for getting out? At the foot of the Duke of York’s statue the greeters, the cheerful and the damp, hand out HM’s Patron’s Lunch ponchos and we march off to form a great British queue. With each sodden shuffle we move further away from the entrance, this will take a while, heavy cloud hung over fittingly it had long to rain over us.

The ghostly poncho line inched its way down, round and back towards security. Looking back the queue had divided between those who had a Patron’s poncho and those who didn’t. In their enthusiasm the staff had given out all the waterproof capes and the later arrivals had none. Some would have feasted on such injustice. Whereas we, covetously clutching commemorative PG tea cups and complementary Boots gift sack, sun cream included, contemplated more weighty matters. Expectation was huge, we had had enough talk, enough debate, what we wanted was the facts. What, we all asked, would be in the Hampers?  Finally breaching security we discovered the future wasn’t as bleak as feared. A small explosion of ticker tape took off at the far end, the dampest of squibs, typical British self-mockery. The queue for the hamper was small; the hamper large, a turquoise buckled box of delights. Congregating around our soggy table our merry band of intrepid sodden ponchoed charity workers, volunteers, guests, in the spirit of Shackleton, Hillary and Tensing, shook hands and clapped backs in mutual regard. We had made it, we were in, now let’s get the grub out.

The tea was hot, Pimms ordered, sarnies emerged, a tea cake and trifle despatched out of turn, a pork pie chomped, rivulets of sobering rain left to drip, union flags raised and ponchos, gradually, cautiously removed. The band thrumped and clashed, marchers marched; gospel singers sang celestially, dancers dipped and turned. The Princess Royal cleared a way for our waving pink-suited Queen and a gabardine Prince Phillip as in their wake came the young ones to range and rover up the Mall. Sadly, Sir Cliff was double-booked on the day.

Flags waved, the parade passed and the sun shone through and lifted the damp spirits. That’s all you need. We all agreed life was good; it was worth getting out to join in the celebration. Now what’s left? Ah, cheese and crackers. 12 trustees, friends and guests of London Catalyst were invited to be part of the historic Patron’s Lunch to celebrate the Queen’s 90th birthday. Her Majesty is a Patron of more than 600 charities and we are proud of our long association with the Monarch.  Find out more about our history

N.B. The Patrons’ Lunch was a paid ticket event the costs of which were covered by our generous guests and volunteers and not by the charity.