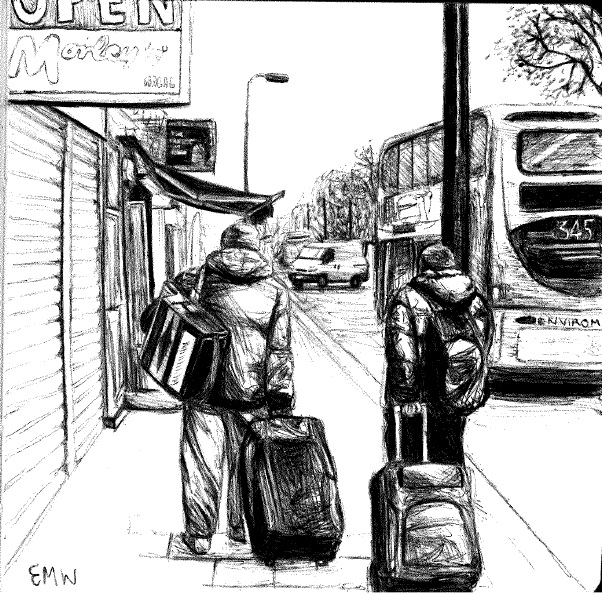 This project established foot health clinics in four community settings assisting 193 people. Many of the homeless clients treated wanted some advice about a foot issue, or two, but quite a number also wanted to tell their story of being homeless. Some of them were heart-breaking, but just listening and trying to understand their circumstances and what happened to them made us aware of how easily things can change your life. John was a regular at this venue where we had set up a foot clinic. We were delighted that so many people wanted their toenails cut – John said he didn’t need his doing and that he did his own. After a few months, each time seeing John at the venue and having a short chat with him, he said “I don’t know how you can touch other people’s feet – it must be horrible. I couldn’t do it!”.

“The therapist is very used to working on people’s feet and helping them feel better” I said. The following month, when I spoke to John, he said he’ll give it a try. With many apologies to the therapist, he had his toenails cut, his feet cleaned, was given advice on simple steps he could take to look after his feet better, was given a new pair of socks & referred to St. Leonard’s Podiatry Service for an ongoing and worsening foot problem. A delighted John said he felt “so much better now”. He knew he had a problem developing and had wanted to get his toenails done, but just felt so ashamed of his feet, he didn’t want anyone to see them. Now he could happily go to the Podiatry Service to get his ongoing foot problem tackled.

Ms D has a diagnosis of paranoid schizophrenia manifest in concerns that others are breaking into her home and poisoning her food. She also responds to command hallucinations by washing and folding her clothes, wrapping them carefully then depositing them in the rubbish chute for the poor people. A call from the client’s daughter was received on duty raising urgent concerns that her mother had no food and no clothing other than that which she wore. Her mother reported to be cold and hungry and upon visiting the social worker found this to be true and D to be in a state of considerable distress.

The London Catalyst Samaritan grant was used to buy the client urgently needed food until her benefits came through and some items of clothing for her to keep warm. That the funds provided were a charitable gift and that the items bought were therefore not to be given or thrown away was also shared with the client.

As a result, D was not only warm and fed, she kept the clothes and did not throw away the food. Moreover, that people care about her, even though they do not know her, has enriched her life and has been a source of ongoing comfort to her.