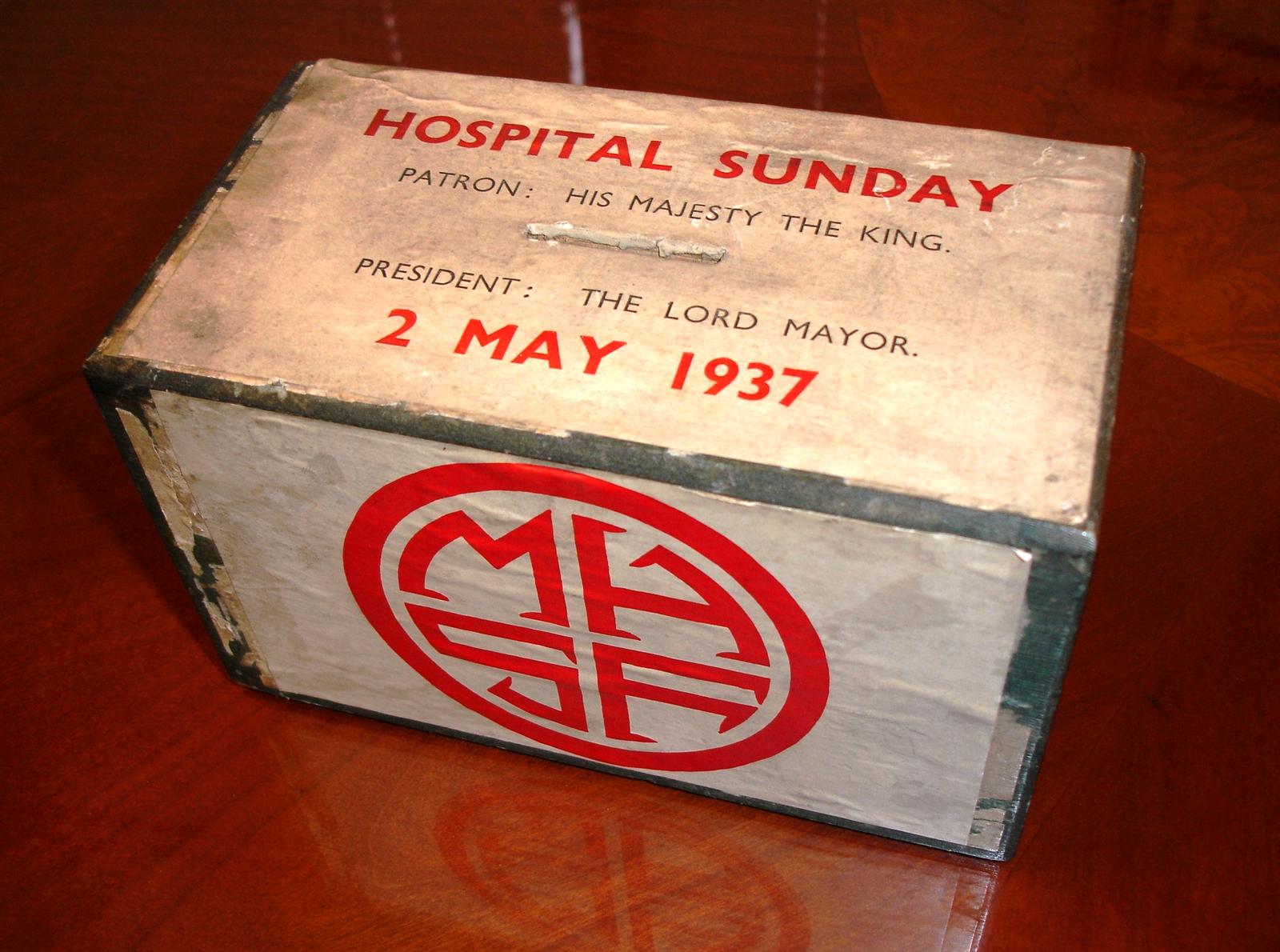 Days of the week have many associations – Super Tuesday, Maundy Thursday, Friday prayers – but what about Hospital Sunday? 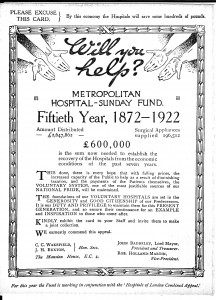 The Metropolitan Hospital Sunday Fund was founded in 1873 in order to organise an annual ‘Hospital Sunday’ fundraising effort to help destitute and sick Londoners meet the cost of their medical treatment.

It attracted the support of the ‘great and the good’ of the day including Sir Sydney Waterlow, Lord Shaftesbury, W H Smith, Elizabeth Garrett Anderson (the first female doctor in Britain), and Baroness Burdett Coutts.

The involvement too of all the major faiths was in itself unique. It was pledged that on one day each year, in places of worship throughout London, a collection would be made to raise funds for the ‘sick and poor’.

In 2002 the charity changed its name to London Catalyst, but our mission remains unchanged: to provide for the sick and poor of London. 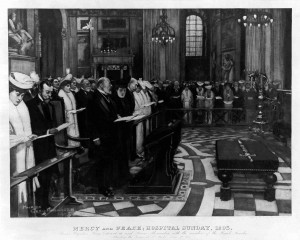 When we were founded in 1872, there was growing concern that the health of the poor was getting worse due to the rising size of the population, poor housing and inadequate public amenities.

The charitable hospitals of the time, as reported in the Pall Mall Gazette of 14th May 1873, revealed a ‘disheartening truth’ that ‘the great mass of the working classes of London are … medical paupers’.

Queen Victoria became Patron in 1874, and each of our Monarchs has filled this role, continuing with Her Majesty Queen Elizabeth today.

In its first year, the Hospital Sunday Appeal raised £26,000 from collections at hundreds of churches and synagogues, and donations rose to a peak of £53,000 in 1920. Individual philanthropists donated huge sums, such as George Herring, who bequeathed £1.3 million (£25 million at today’s value).

Helping the ‘sick and poor’

Helping the sick and the poor is integral to all major faiths and vital for social cohesion. In a voluntary form it can be traced back through economic and social history. Back in Medieval times, guilds encouraged a form of personal health insurance:

“Each brother or sister of his fraternity shall pay to the helping and sustaining of sick men which have fallen in disease as by fallen down of an house, or  hurting of an axe, or by diverse sicknesse, twelfe pennies per year”  Gilda Carpentar, London, 1389

But for those outside such institutional support – the vast majority – there was nothing. An Act of Parliament in 1601 saw overseers of the poor appointed by each parish, with the power to introduce local taxes to help the old and infirm whilst putting to work the able-bodied poor. The 18th century Poor Law led to the building of workhouses for the destitute, and the Poor Law Amendment Act of 1834 ensured that no able-bodied person could get poor relief unless in a workhouse. The poor must help themselves. A belief which remains at the heart of our welfare benefits system today.

But what of those who can’t help themselves and who do not fit neatly into the cabinet of curiosities we call the welfare state?

Samaritan Fund – filling the gaps in a city of extremes

The money we raise through the Hospital Sunday appeal is used for our Samaritan grants. This hardship fund is distributed through a London-wide network of hospitals, social work teams, food banks, advice centres and other frontline agencies. It fills gaps in statutory provision, offsets delays and provides assistance when none exists.

“The Samaritan Fund was used to buy clothes and groceries for a woman who was waiting to access her benefits. She had suffered a house fire the previous night in which the flat and its contents had been destroyed.”  Lordship Lane Community Mental Health Team, Southwark

“A woman with four young children left her husband after repeated domestic violence. She has a small grant from Social Services but very little money. With the help of the Samaritan Fund, we were able to buy some bedding for the children, a kettle, and some clothes for the children.”  Renewal Refugee and Migrant Project, Forest Gate

We live in a city of extremes; of wealth and poverty, diversity and isolation, entitled and excluded. The overlaying suspicion is of the feckless, the scrounger and the sturdy beggar. Adopting such a stereotype makes it easy to dismiss the complicated reality of poverty today. In a modern city what do you do when you have no money, no official identity, have nowhere to stay, no means to travel and are trapped in a destructive relationship, battling addiction or long-term recurrent illness?  The benefits system today is increasingly restrictive and punitive. 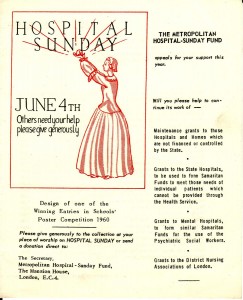 The Bible story of the Good Samaritan (Luke 10: 25-37) is a recognised emblem of selfless care; helping a stranger in need. The parable is a response to the question “And who is my neighbour?” The reply is self-evident and the answer to love your neighbour regardless. The parable also contains a subplot of a suspicious sectarian society where people walk by and the poor are left to fend for themselves. It’s a cruel, divided world until someone steps across the road to help. The Hospital Sunday Appeal, like the Good Samaritan, kept faith with that basic human requirement to respond immediately to need wherever it arose and despite the prevailing social prejudices of the day.

Traditionally, our annual appeal took place on one day in early summer – Hospital Sunday – but now we welcome donations year-round.

All money raised goes towards our Samaritan Fund, helping people in desperate situations through small emergency payments as we have done for every single day of the week since 1873.

To donate to our Appeal, click on the ‘Donate’ button at the top of your screen, or post a cheque to London Catalyst, 45 Westminster Bridge Road, London, SE1 7JB. Please contact us if you have any questions at all.

“Four spectres haunt the Poor – Old Age, Accident, Sickness and Unemployment. We are going to exorcise them. We are going to drive hunger from the heart. We mean to banish the workhouse from the horizon of every workman in the land.”  David Lloyd George (Prime Minister 1916-1922)

“More than 7,500 people slept rough in London last year, including 880 under-25s, and research by Crisis shows the figure has almost doubled in six years.”  Crisis, 2016